T’is the season to be jolly, shop till you drop and generally try to live life through the lens of a Hallmark card or a TV movie. Too bad the movie is usually one of those rapid-fire, vapid latter-day concoctions where they pour on the saccharine and bang home the message with a sledgehammer.

I watched The Bishop’s Wife tonight. A lovely old movie with Cary Grant, Loretta Lynn and David Niven, the movie is neither sentimental nor overtly Christian, title notwithstanding. It’s just a simple story (granted, a simple story with the original McDreamy, Cary Grant) that reminds us not to forget that there are people less fortunate than ourselves during this holiday season when it’s all too easy to lose oneself in grandiose schemes and commercial concerns. 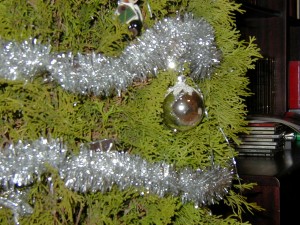 Sometimes not seeing the whole is what makes a good picture

Meanwhile, the cultural leitmotif of the day remains WikiLeaks and the wraith-like Julian Assange whose tens of thousands of cyberspaced emails and cables appear to have thrown everyone into a bit of a tizzy.

Although I’ve read bits and pieces on the subject (not to mention interminable commentaries), I have no idea if the information in these leaks is a genuine, eureka, Pentagon-Papers, moment that will save democracy (as Assange in his best delusions-of-grandeur tone asserts) or just a lot of nonsense.

But as a person who spent many years writing for old media (not to mention a curmudgeon), I tend towards the latter.

Journalism, like life, is largely humdrum. What people know and say – well, most of what they say consists of details that are neither here nor there – and have little relevance to anyone outside of those directly involved. Hey, just because people have titles and embossed business cards doesn’t mean they’re smart, witty or fun at parties.

As a journalist, it wasn’t the ideas (i.e., problems) that were difficult to find; it was the execution of it as a viable story.: Finding the right people to interview, the apt quote, the pattern that would turn a jumble of information into a coherent whole.

Let’s face it, good journalism is a lot of work. Hours on “ignore” as you wait to talk to the right person (or to find the right person) who might know a thing or three about your topic. Yet more hours talking to them (bearing in mind that the bulk of most interviews consists of babbling incoherencies) then umpteen more hours transcribing said interview. Finally, the denouement: pacing and rearranging the top drawer of your desk, rereading your notes, trying to find a way to make all this gobbledygook make sense.

Assange and his cohorts cleverly did away with all those boring bits. They were given the cables and mails, downloaded them onto their site and now they’re firmly clamped onto the moral high ground.

Except as nearly as I can make out all we’ve found out some minor gossip and some tragic bits we all already knew, namely, that “friendly fire” has killed a lot of innocent people – and that those young men and women in uniform, all the hype notwithstanding, are young men and women. Emphasis on the young. Who don’t know who the enemy is half the time and when they do, usually can’t shoot straight.

I once read that in the second world war easily half or more of the casualties were killed by their own “side”. In the heat of battle the vast majority of soldiers panic and shoot at anything that moves. Including their own feet. Is there any reason things are any different now? Don’t think so.

Other shocking revelations from the WikiLeaks crew consist of the earth shattering information that politicians and diplomats say indiscreet things behind the scenes that they’d rather not say in public. Who knew. Unless you’re from a galaxy far far away, you I suspect. Hell, half the time the stuff they say on the record is drivel.

As children we believe in Santa Claus and it is the mystery, the not knowing that gives Christmas Eve its magic. Diplomacy, relationships – well, they also need a touch of that. If everything is thrown out in the open it’s difficult to figure out what’s trash and what’s real.

While there may be some nobility in preventing shady backroom deals, with all the information technology out there today even “elites” have trouble hiding. In general there is far more information than we needed to know.

Tonight, as small children breathlessly await the arrival of Santa Claus, it is perhaps a good time to contemplate that magic and mystery are sometimes more relevant than knowing the minutae. There’s actually a kind of beauty in not knowing – but believing. Believing that overall most people are decent; that most people will respond in kind if we treat them well and that the ultimate transparency is trust. And like Cary Grant in that old movie, angels might just be our better selves.